TrustATrader.com member buys new bike for 13 year old boy after his was stolen 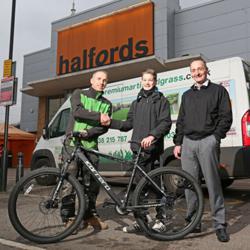 After a young boy had his bike taken following a confrontation in the street, TrustATrader member Premium Artificial Grass generously offered to buy him a new one.

13 year old Luis De-Vall from Stevenage was at the local recreational area with some friends when it began to rain, so they decided to shelter under a nearby underpass.

Luis had his bike with him, and propped it against the railings next to where he and his friends were chatting while they waited for the rain to pass.

There were also two older boys of about 16 in the underpass smoking, which Luis and his friends didn't pay much attention to at first.

After a short time, one of the older boys came over and said "oi big boy, I’m taking this bike", before getting on Luis' prized possession and riding off.

The police were informed right away, and many people helped to look for the bike, but unfortunately Luis hadn't been able to get a good look at the older boys' faces as they had been wearing hoodies.

Luis' father Jason said that Luis had been shaken up by the incident, but admitted "I’m glad he just let the boy take the bike."

Jason went on Facebook to post details of the theft of his son's mountain bike, and the information was shared over 400 times by those seeking to help.

Some of those who saw the post were Emma Brown and her husband Justin, who runs the TrustATrader member business Premium Artificial Grass in Stevenage.

Being a parent himself and wanting to help, Jason offered to buy Luis a brand new bike from the local Halfords.

"I could relate to what had happened and we were in a position to help," Justin said.

"It's nice to do something good to counteract what happened.

"He was ecstatic. It was a happy ending to a sad story."

Jason said: "Justin and Emma have restored my faith in humankind. Luis loves his new bike."

The incident took place at around 3:30pm on Saturday 28th January. Anyone who has any information should contact Herts police on 101.

Original story: Thanks to The Comet