Mel Giedroyc is the new voice of TrustATrader! 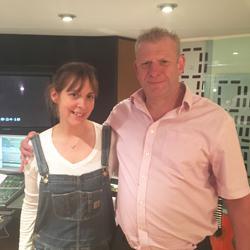 The new voice of TrustATrader radio advertising is presenter, actress and comedian Mel Giedroyc, best known as half of comedy and presenting duo Mel and Sue, together with Sue Perkins.

Mel has most recently been seen on television presenting BBC1's primetime Saturday night singing competition Let It Shine, along with Graham Norton. The head judge on Let It Shine was Gary Barlow, as they attempted to find young men to star in The Band, a new stage musical featuring the songs of Take That.

Mel also presented the much loved and long-running baking competition The Great British Bake Off, with co-presenter Sue Perkins, from 2010 until 2016.

No stranger to radio, Mel has presented the Saturday lunch-time show on Magic 105.4fm since April 2016.

Mel has recorded a number of brand new radio adverts for TrustATrader, the first of which can be heard by visiting the website homepage and clicking the 'latest advert' button.

Listen out for Mel's new TrustATrader adverts which will be released over the coming months.

The adverts will be broadcast on over 60 radio stations across the UK including Smooth Radio, the Free Radio Network, Heart FM, Jack FM, Mix 96, Radio X, LBC, Gem 106 and many more.