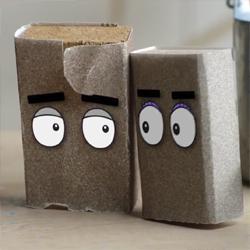 TrustATrader.com has been the proud sponsor of ITV3 afternoons since summer 2017, and has now had a new selection of adverts produced to feature before and after each programme break.

The new ads are designed to put a smile on your face, and feature a range of tool-based characters in a variety of amusing situations!

There's Scraper and Sandpaper, Mum and Daughter paintbrushes, Allan the allen key, Hammer and Screwdriver and many more, showing us what they get up to when the humans aren't around.

You can check out the TrustATrader.com ITV3 afternoons sponsorship adverts for yourself right now - we hope you like those crazy tools!

TrustATrader.com sponsors afternoons on ITV3 from 2pm to 7pm, every day of the week - a major commitment which will help keep TrustATrader and its members at the forefront of public awareness. The adverts feature a total of 28 times a day, ensuring a great chance of viewers catching them.

TrustATrader.com is also advertised on over 60 radio stations nationwide, with the current voice of TrustATrader being presenter, actress and comedian Mel Giedroyc.