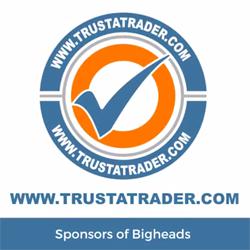 As TrustATrader is the sponsor of the show, a series of adverts have been filmed to be shown before and after each break, ensuring the biggest audience for the ads and giving TrustATrader.com and its members great publicity.

The first TrustATrader adverts will be seen on this Sunday's episode of Bigheads, the hilarious new game show in which members of the public compete for money in physical games - all while wearing giant celebrity heads.

Jenny Powell and Kriss Akabusi provide commentary for all the action.

This edition sees David Beckham, Ed Sheeran, Taylor Swift, Prince Charles and Queen Victoria all battling it out to get past bouncers into nightclubs, fight over microphones to record a hit single and escape chasing paparazzi - but which of them will win tonight's jackpot?

We're able to provide an exclusive first look at a pair of the adverts here, which will appear before and after one of the breaks in the show:

At TrustATrader we're always striving to provide our members with the best possible support and publicity. The sponsorship of ITV's Bigheads takes this to another level, and will bring a whole new audience to the website and the businesses of our trusted traders.