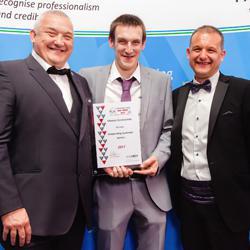 At TrustATrader we are proud of our traders and like to celebrate their many achievements. So we were thrilled to hear that one of our traders, Olympic Construction Ltd, has scooped first prize for Outstanding Customer Service in the Property Care Association's Best Practice Awards – for the second year running!

Olympic Construction Ltd is a damp-proofing company based in Oldham. For the Dawsons, damp proofing is in the blood – the company’s Managing Director, Adrian, is the third generation of Dawsons to run the company and he is delighted that his son, Simon, has joined the thriving family business.

The business was founded as a building works in the 1940s by Adrian's grandfather, followed by his father. In 1985, Adrian took the helm, expanding the company’s repertoire to remedial elements of the building industry. After gaining a degree in Business Management and Administration from Huddersfield University, Adrian's son, Simon, went on to qualify as a damp and timber surveyor before joining the family business.

With over 50 years' experience in damp proofing and a strong sense of family pride, it is no wonder that Olympic Construction were, once again, named Best Customer Service at the tenth annual PCA Awards, held at The Slate, University of Warwick. The awards celebrate outstanding standards and service in specialist structural repair, wood preservation, damp-proofing, structural waterproofing, flood remediation and weed control sectors and this year saw the toughest competition yet, with a 20% rise in entrants.

Judging took place across three categories: Student of the Year, Best Customer Service, and Contractor of the Year. The panel was made up of independent experts across the relevant industries and the Best Practice categories were judged by: Dr Hector Altamirano, a building scientist for UCL; Paul Cribbens, Standards Manager at NHBC; and Ray Ferris, Head of Compliance and Standards for TrustMark, the Government-endorsed scheme for trades in and around the home. The Outstanding Customer Service Category was sponsored by Aquobex and despite stiff competition, the award was collected by Adrian and Simon for the second year running.

The PCA’s Chief Executive, Stephen Hodgson, said: "The judges felt that Olympic Construction has a clear and robust code of ethics, which is at the heart of their way of doing business.

"It's a tremendous achievement to take this title two years in a row and they are very worthy winners.”

TrustATrader's Gary McEwen said: "This is another great accolade for Olympic Construction and I would like to extend many congratulations from me and the TrustATrader team. We are very proud of all of our traders and companies like Olympic represent our belief that local, friendly traders really do offer the best service."

After two fantastic years, the TrustATrader team can’t wait to see what Olympic wins next year!