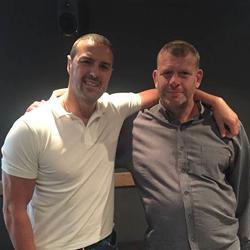 The new voice of TrustATrader is comedian, actor and television presenter Paddy McGuinness.

Paddy, born Patrick Joseph McGuinness, is famous for his work with fellow northern comedian and actor Peter Kay on Channel 4 programmes such as Phoenix Nights and Max and Paddy's Road to Nowhere, as well as his presenting of shows such as ITV's Take Me Out.

Paddy also played the character of survival enthusiast Dougie Ryan in a run of six episodes of Coronation Street this summer.

Paddy has voiced a number of brand new radio adverts for TrustATrader, the first of which can be heard by visiting the homepage and clicking the 'latest advert' button.

Paddy will be touring in 2015 and 2016 with the "Daddy McGuinness" stand-up tour throughout the UK. The tour is due to open in Scunthorpe on 28th September and the final date will be at the Hammersmith Apollo in London on 27th February next year.

Listen out for the new TrustATrader adverts featuring Paddy, which will be broadcast on over 50 radio stations across the UK including Absolute Radio, Smooth Radio, the Free Radio Network, Heart FM, Jack FM, Mix 96 and many more.