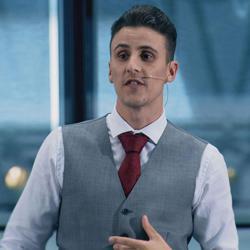 You know you can trust a trader when he receives almost perfect reviews and is picked by none other than Lord Alan Sugar.

This year's winner of the BBC series, The Apprentice, is TrustATrader registered Joseph Valente. 25 year old Joseph's plumbing business, Impra-Gas Plumbing and Heating, has been registered on TrustATrader since 2013; those who saw his impressive pipe-work in episode 6 will not be surprised that Impra's services have gained 16 reviews in the past year, and an overall rating of 4.97 out of 5 stars.

Joseph's outstanding levels of service and ambitions for the future of his plumbing business drove him into entering this year's competition, in which renowned entrepreneur Lord Alan Sugar puts candidates through rigorous challenges in order to select a winner. Joseph's performance throughout the challenges and his robust business plan to franchise out his plumbing business resulted in his overall victory despite stiff competition. As well as the accolade of being named Apprentice 2015, Joseph has won Lord Sugar's partnership and a £250,000 investment.

Lord Sugar said of Joseph’s victory: "Joseph is a great example of what's possible. He turned his life around and decided he was going to go to work and here he is today, a well-deserved winner of The Apprentice and I look forward to him being my business partner. I hope it inspires a lot of people to see what is possible in this world."

Since a young age, Joseph has always worked hard to strive for excellence. He gained a plumbing apprenticeship, which led to him establishing his own business. It is his intention to give others like him the opportunity to succeed by making apprenticeships an integral element of his new business model: "Apprenticeships are going to be the backbone of this country, and off the back of this journey I'm going to make sure I go out and promote as much as possible how effective apprenticeships are."

You can take a look at a few of Joseph's reviews here.

At TrustATrader, we are, of course, delighted that another one of our local traders has received the public recognition that they deserve. We offer Joseph our huge congratulations and are proud that our reviewers' opinions of his business have been echoed by Lord Sugar and his team.