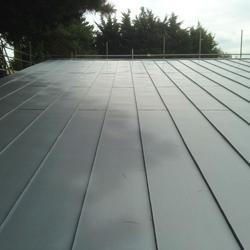 TrustATrader member ELC Roofing has received a great deal of attention and interest in the huge barrel-vaulted zinc roof installation recently completed on a new home near Clare in Suffolk.

ELC Roofing is owned by Edward Carlo, 34, and is based at the Suffolk Business Centre in Sudbury. Edward has been a roofer since he was 17, and has been running the business since 2007.

The roof has attracted interest and positive attention not only from local passers-by but also from the wider world of architectural design due to its unusual appearance and the use of the very new material of zinc.

The story has been featured in the Suffolk Free Press newspaper, where Edward commented on the the roof project, saying: "We are under the impression that it is one of the biggest in Suffolk and maybe even East Anglia.

"We have checked with our zinc suppliers and they are not aware of a zinc roof that's bigger in the region.

"There are not many of these shaped roofs in this area and, although zinc roofs are becoming more popular, there are not many zinc installers in Suffolk with the qualifications and skill to carry out this type of project."

The ELC Roofing team have considerable experience of working with the roofs of period and traditional homes, but Edward believes that the attractive and lightweight material of zinc could be seen on an ever-increasing number of buildings within the next ten years.