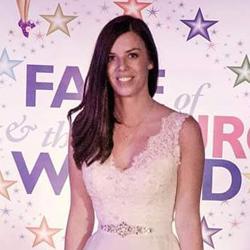 Trust A Trader’s talented Sales Assistant, Sophie Ponsford will be heading to Disneyland Paris in May 2017 to compete for the title of “Face of Europe & the World” in a charitable beauty pageant designed to identify females who possess both inner and outer beauty.

The “Face of Europe and The World” pageant was founded by the brain injury charity, Headway, to encourage charitable works and help people to work together for charitable causes. The aim of the event is to raise awareness of charities and emphasise the fact that true beauty comes from within.

With eight years in the care industry, Sophie entered the competition because she wanted to contribute to the valuable work undertaken by Headway; the opportunity to wear her wedding dress again was an added incentive! She wowed the audience and judges with her caring demeanour and gained not one, but two sashes: the much coveted title of Princess of South England and the title of Miss Charity, awarded to the contestant who raises the most money for their designated charity.

In addition to the traditional pageantry, contestants fundraise for charities close to their hearts. In previous years, all fundraising has been for Headway, but due to the tremendous success of the pageant, 2016 contestants are able to choose their own national and international charities to support; funds are then split between Headway and each contestant’s chosen charity. Sophie’s charitable work is still underway, and she plans to tackle the world’s longest zip wire later this year.

Trust A Trader’s CEO, Gary McEwen, says: “I and the whole Trust A Trader team are absolutely delighted and incredibly proud of Sophie’s success. We pride ourselves on our charitable work and the personable, compassionate and helpful nature of our staff. Sophie’s achievement is testimony to the fact that she cares deeply about the welfare of others. We wish her the best of luck in Paris in May and promise that every member of the Trust A Trader team will be rooting for her!”

If you would like to support Sophie, you can do so via her fundraising page on JustGiving. For more information about her chosen charity, please visit the Headway website.